Print Quality: Not great, but watchable 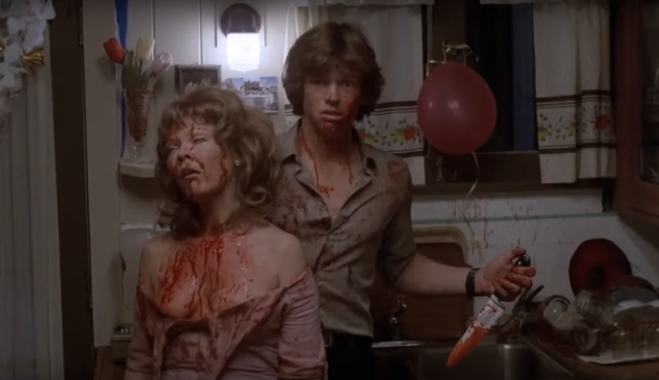 I remember the chills that ran down my spine the first time I dropped the needle on Mercyful Fate’s first EP and was totally blindsided by that blistering guitar solo that opens “Corpse Without a Soul.” I mean the song opens with the fucking solo! Thirty years later, my experience watching the opening scene of Butcher Baker Nightmare Maker was almost exactly the same. The first 3-minutes of this film are just so intense that it leaves you wondering where can it possibly go from here.

Turns out that one of the things that make that opening sequence so distinct is that it was born of a different director and cinematographer. Apparently, Michael Miller (Jackson County Jail) shot that bit with Jan Du Bont (Private Lessons, Die Hard) but both were fired and replaced by veteran TV show director William Asher and Robbie Greenberg (Lucifer’s Women, Swamp Thing) to finish it out. Somehow the final product works, though…and then some!

But then again, how could it go wrong with the brilliant casting of Susan Tyrrell (Forbidden Zone, Angel, Open All Night) and Jimmy McNichol (those fabulous McNichol’s) in the leads and Bo Svensen (The Inglorious Bastards, Inglourious Basterds) as the pathologically overconfident homophobic detective thrown into the mix.

It’s difficult to summarize much of the story without ruining half the fun, but I assure you Tyrell delivers and absolutely crushing, must-see performance as Aunt Cheryl, whose incestuous lust for her nephew Billy (McNichol) leads to some delightfully insane and ever-escalating consequences. William Asher deserves equal respect for his perfectly paced slow burn of Aunt Cheryl’s unraveling that builds to psychotic crescendo that is purely unforgettable cinema. Kudos, too, to the anachronistically positive portrayal of homosexuality embodied in Billy’s basketball coach Tom Landers played by perennial TV actor Steve Eastin. This film was truly ahead of its time.

For me this was the real standout in the Aero Theatre’s Horrorthon line-up this year and immediately skyrocketed to the top of my list of must-see movies to recommend.

It’s just nuts that this film still flies somewhat under the radar almost 40 years after its release.