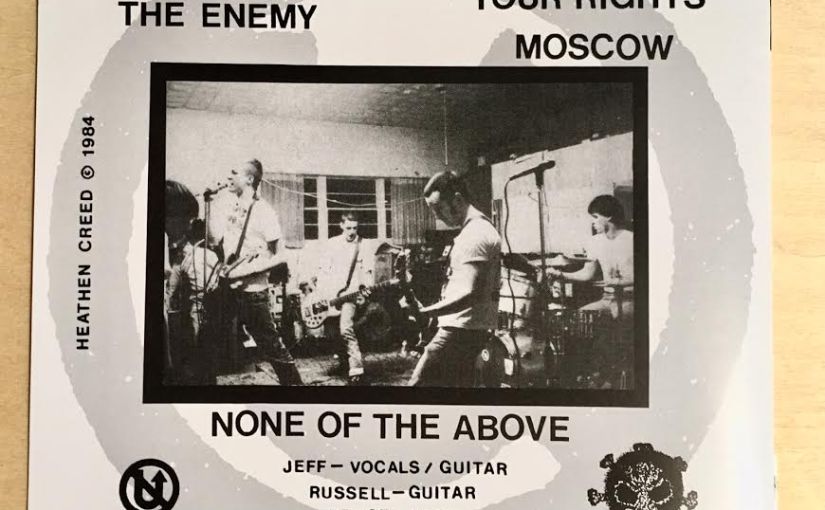 Being from Oklahoma NOTA is like Black Flag or Agnostic Front for me. They were/are that important, and had a huge impact on me and my friends. I didn’t really start paying attention to punk until around 1981, after all, everyone was saying it was dead. I knew of the Sex Pistols, I caught the news story about their show at Cain’s Ballroom on the local OKC channel 5 10pm broadcast, and it was the craziest thing I had seen at that point in my life. As the teen years started to come on, and the need to define myself among the masses, The Clash was the first punk band I got into. The whole notion of punk happening in a place like Oklahoma seemed inconceivable to me. That would soon change though. By 1982 I decided it was time to get off the fence and be punk, thinking I was probably the only one in the state. My best friend down the street, Dallas Vickers, got on board, so that made two of us. A short while later we discovered KGOU one night while looking to see if there was anything else on the radio other than the crummy top 40 stuff. We suddenly discovered we weren’t the only punks around (though we were not dressing the part at that moment in time). I stayed up listening to see what else there was, and discovered shows like My Tunnel, which played hardcore punk, and would inform listeners of shows in the area, and what local bands were up to. My mind was blown. There was a punk scene happening in Norman, just south of me, and in Oklahoma City, and Tulsa. Local bands like No Direction, Brown 25, Diet of Worms, Death Puppy, and others. On top of all that, there was this band from Tulsa, None of the Above, or more casually, and shortened, NOTA (pronounced No-duh, but say it quickly so you don’t sound like you’re saying, “No duhhh…”). All the previously mentioned bands were great, but NOTA were on a “whole nother level.” They had an intensity that blazed like no other. They’re on the classic Welcome to 1984 comp with bands like Rattus, Stalin, Raw Power, Upright Citizens, BGK, Crucifucks, and Terveet Kadet , so that’s says something of the level they were at. I’m of the opinion that everything this band did is worth picking up. Their output from Live at Crystal Pistol (you can get the vinyl and CD versions through Prank) on to that first album on Rabid Cat are essential.

Moscow was their first release on vinyl, and it wastes no time getting down and getting loud. Kicking off with “This Country”  and keeping it at 11 all the way through “The Enemy,” “Taking Away Your Rights,” and the title track (check out that guitar riff!). It never lets up for a second! The guitars roar and snarl, and the vocals match. The bass is heavy and dark, while the drums are surprisingly catchy, despite the speedy tempos. I remember the day I got this and listening to it over and over, and my friend Dallas coming over and we cranked it until my mom pulled up in the drive way. There’s a reason we adorned our clothes with their name, and copped the art from Rusty Short to put on the back of our jackets and Oxford button up shirts. Timeless music right here.

Artcore fanzine fortunately rereleased Moscow, remastered from the original tapes. The sound is more full, and somewhat heavier than on the previous pressing(s). The packaging is pretty sweet as well, with a history of the band, some flyer art and photos, as well as lyrics and the back cover art for the original Unclean pressing included (though slightly altered). It’s part of issue 40, which includes interviews with Strike Anywhere, The Chisel, Vicious Dreams, and Septic Death, Jawbreaker, and Iconoclast in the Vaultage section. You gotta get this by all means.  (MA)