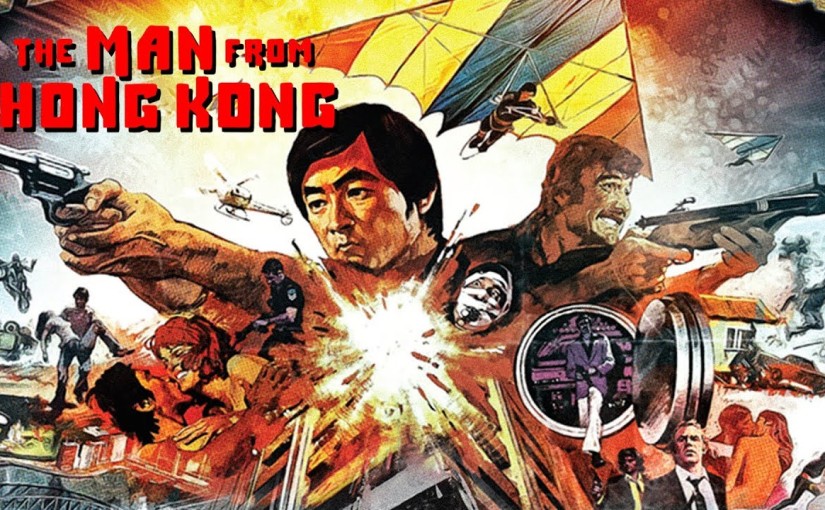 The Man from Hong Kong, aka, The Dragon Files

I was all geared up to review the killer soundtrack for this, but then my damn amplifier conked out. Can’t do a proper review listening to a YouTube rip, so I decided it was a good excuse for a re-watch and review of the actual film.

Ozploitation meets Golden Harvest in this perfect marriage of unbridled action and absurdity from Dir. Brian Trenchard-Smith of Turkeyshoot and BMX Bandits fame. You certainly know you’re in for a wild ride when a two-pronged chase scene breaks out before the opening credits even roll. On the one side, drug smuggler Win Chan’s (Sammo Hung) bellbottoms are flying in hi-karate action as a narc pursues him to the top of Australia’s Uluru. On the other, a motorized chase between a helicopter and car ending in a massive explosion and the untimely demise of bad guy #2.

Enter kung fu legend Jimmy Wang Yu (One Armed Swordsman, Master of the Flying Guillotine) as inspector Fang Sing Leng—imagine Henry Silva, but Asian and with other-level martial arts skills—to extradite Win Chan to Hong Kong for justice. However, Chan is soon taken out by a sniper, and the Aussie narcs (who you’ll recognize as Mad Max’s Fifi, Roger Ward, and the Toecutter, Hugh Keays-Byrne) can’t keep a leash on the titular man from Hong Kong. It’s no slow, all go for the inspector as he mows down countless henchmen to get to the man behind it all, Jack Wilton, who kind of looks a bit like Dennis Parker in his prime.  The inspector is not just a fighter, though, he’s a lover too, with an array of uncomfortable gettin’ it on scenes to prove it.

To say this is an action movie is an understatement as it’s almost impossible to stay on top of all the car chases, kung fu battles, deep tongue lashes, and explosion after explosion after explosion. Although Sammo Hung’s character is offed pretty early in the film, he makes his indelible mark behind the scenes as the martial arts choreographer here. His top-shelf action really has an impact, as most Western movies tend to go a little soft in the kung fu department.

Legend has it that producers dropped 20% of the film’s budget on the rights to use Jigsaw’s Sky High as the theme song, but that’s a story I’ll save for when I get my amp up and running again.

In the meantime, don’t shy away from this classic…even if you have to drop $1.99 to watch it streaming.