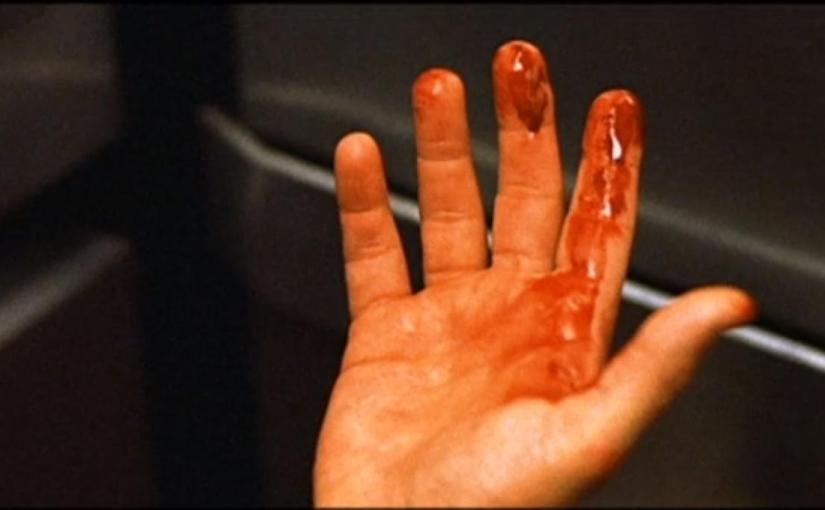 Transfer Quality: I would say…good? Looked like a DVD basically.

I’ve been a fan of Refn’s work since I first saw Drive. When Only God Forgives came out to middling reviews, I went to the trouble of actually buying a digital copy instead of waiting for a DVD or BD release, since it wasn’t playing in any theaters around me. I loved it for seemingly all of the reasons many reviewers hated it. Since then, I’ve played close attention to Refn’s new releases and his unique film streaming service, byNWR. For some reason, though, I never took a deep-dive into his work before Drive. When a friend recommended that I watch Fear X, I jumped in almost completely blind; the only knowledge of the film I had was its title, poster, and the Rotten Tomatoes aggregate review score that pops up when you Google it (58%).

I was disappointed, at first, with the beginning of Fear X. The basic premise is straightforward: protagonist Harry Caine, played by John Turturro, is a mall cop whose wife was shot and killed without explanation. There are some long, moody shots that prepared me for a meditative, thoughtful film, but the first half hour was populated with cut-and-paste thriller plot motivations and tropes (a dead wife, a man pouring over camera footage, the obligatory shot of news paper clips and photographs stuck to a wall used as shorthand to communicate the protagonist’s obsession). However, there were small moments that captured my attention enough to continue, like brief visits from widow Harry Caine’s murdered wife and an inexplicable cut to an abstract red mindscape.

I appreciated scenes in the beginning of Fear X much more after viewing the entire film. Many of them border on parody, but rather than being humorous, they deliberately couch you in the comforts of genre while depriving you of its joys. The most explicit example of this is a quintessential diner scene. Harry finds a small-town restaurant where he questions a waitress about an individual he believes is connected to his wife’s murder. There is a shot of Harry sitting down with a cup of black coffee and a plate of apple pie. On the wall behind him is a big mural of an American flag. The scene ends with a slow zoom on the flag, making the scene’s intent obvious. It made me wonder, “Do people really go to diners alone and order apple pie and coffee?” Probably, but not as often as cinema would have you believe, and, perhaps, even less so when they’re on the hunt for a murderer. It’s not laugh out loud funny, but it’s clever and signals Refn’s intentions.

As I watched, I started to realize that this isn’t a thriller at all. It’s an anti-thriller, a story about a world where vengeance is impossible and, even more importantly, knowledge is out of our grasp. This goes for both Harry and the viewer. Fear X certainly isn’t a movie for anyone who wants easy answers, because there aren’t any to be found. As Harry pushes forward on his quest to know why his wife was murdered, his anger and frustration grow. We watch his feelings get increasingly intense until it’s no longer possible to interpret what is being shown to us literally.

Watching this film from 2003 after being introduced to Refn’s work in 2011, I couldn’t help but see the signs of him honing his craft as a director. There is some serious obsession with heavy unnatural lighting, blood orange creeping on red in particular, though not to the extent of his more recent work. Harry, like many of Refn’s characters, is a man of few words, and his motivations are extremely simple. He walks a path from point A to point B, going along with whatever he needs to get there without undue deliberation while the camera lingers and zooms just to the point of discomfort, without overstaying its welcome.

While Fear X is not as refined and definitive as my favorite Refn movies, it stands on its own merits and has interesting ideas that subvert genre expectations. This is not a graphic movie; when there is violence, it is intentionally restrained, awkward and uncomfortable. Some of the scenery, with colors that manage to look beautiful despite their garishness, and dialogue delivery, often stilted in a naturalistic way that doesn’t usually play well on the screen, remind me of Dario Argento’s giallo cinema. The ending is unsettling and cathartic at the same time; it is this uneasy mix of both that makes Fear X so effective. The movie seems to tell you that you will never have the answers or catharsis you want, but never allows you to accept that. Bonus points for being creepy right until the end; be sure to stay for the credit roll accompanied by copious security camera footage utilized throughout the movie proper.

Recommended for people who like asking questions without expecting answers in return.