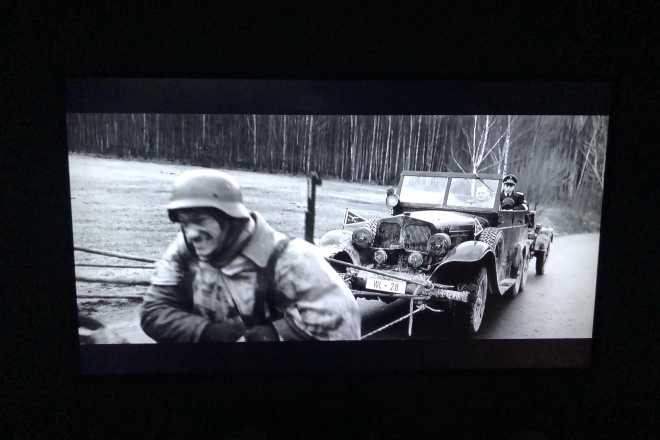 This film was surprisingly awesome.  Its a recent movie shot in stark black and white and all in German. The story takes place two weeks before the end of World War ll in 1945 Germany.

The main character is a German private who has deserted from his troop.  He’s on the run and unsuccessfully tries to loot because he is starving and cold.  While on the run he comes across an abandoned army vehicle with a suitcase of belongings and a Nazi captain’s uniform.  The captain is nowhere to be found.  The private cleans up, and puts on the uniform.  Minutes later another low ranking German soldier appears (its obvious he is a deserter as well).  The new “Captain” takes on the grunt as his driver and later on runs into other German soldiers who are also obvious deserters.  He tricks them all into following him into a “secret mission” for Hitler as their troop commander.  This new “Captain” starts to emulate those he feared and ran from.  He seems to have gone completely crazy.

Through many bizarre twists & turns the “Captain” and his fellow crew of deserters end up at a prison camp for looters, criminals and other German deserters.  What follows is brutal and unthinkable.

This is beautifully filmed. The camera work is great, the acting is superb, and the story/plot are that of something I never could have imagined happening.  Supposedly this is based on a true story.  War is hell, and his film proves it.  (NW)